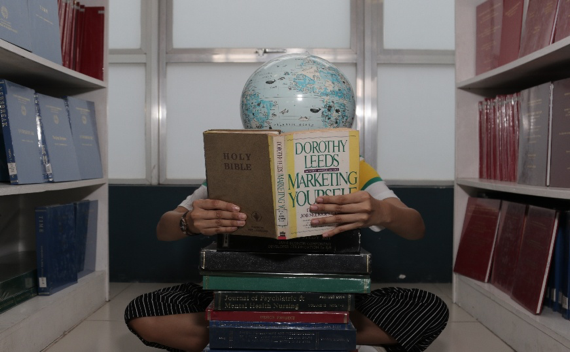 Batangas Vice Governor Mark Leviste gave the students a notable disquisition on how to live through the mission, vision, and core values of LPU-Laguna which was inspired by the late Philippine President and founder of LPU, Jose P. Laurel.

“Our mission is our guiding light to success. Our vision is our road map, our trail.” Vice Governor stated.

Batangas Vice Governor Mark Leviste (center) accepting the plaque of appreciation with the administrative staff and faculty members of LPU-Laguna.

Jervis Buera from the School of Health Sciences is this year’s winner of JPL Look-alike contest while Trisha Lei Maligalig is the PHL Look-alike winner. Both stood confident as they portray the father and mother of Lyceum, Jose P. Laurel and Pacencia H. Laurel.

LOOK-ALIKE. Winners of the JPL and PHL Look-alike confidently posing for the camera.

Karylle Anne Cabuyao from LPU-Laguna IS penned the best composition in Essay Writing contest. She amazed the judges with her interpretation of the theme, Character is Life Dominated by Principles. She reiterated in her essay, Finding Needle in a Haystack, the importance of having a principled leader. It might seem impossible but we can still find a good one.

Jon Laurence Napawit from College of Arts and Sciences (CAS) captured the best shot for the Photo Contest. He interpreted in his photo the theme, Lifelong learners who are globally competitive, imbued with God centeredness and a nationalistic spirit. According to Napawit, he used the available materials in the library to compose his picture. He added that the winning photo is an accidental shot.

BEST SHOT. Napawit’s interpretation of “Lifelong learners who are globally competitive, imbued with God centeredness and a nationalistic spirit.”

The College of International Tourism and Hospitality Management (CITHM) showcased their expertise in cooking as they bagged the gold in Laurel Cooking Contest. They prepared a palatable Stuffed Chicken Roulade that the judges deemed to be the best-tasting dish in the competition.

CAS’ brought home the silver. Their Jamonada con Laurel also satisfied the taste buds of the judges. SHS’ Roasted Pork Loin also ended up in the podium as they snatched the bronze.

SINGING OUR HEARTS OUT!

CITHM Choir performed the LPU Hymn with perfect harmony and blending. The team brought home the gold in LPU Hymn Choral Competition. SHS grabbed the silver and CAS took home the bronze award for this competition.

HARMONY. CITHM sang their way to the top.

THE ART OF MIMICRY

SHS snatched the gold in Art of Mimicry Contest. They were able to impress the judges in interpreting a painting inspired by LPU’s core values through narration and dance.

CAS and CBA took home the silver and bronze respectively.

According to Jeck Acelar of OSA, “Art of mimicry is a creative way of promoting the core values [of LPU] thru [the] Arts”.

BATTLE OF THE BRAINS

SHS continued their winning streak as they gave the most number of right answers in JPL Quiz Bee. CAS placed second while COECS came in at third.

For the second straight year, SHS was announced Overall Champion for MSAD 2019, besting CAS who settled for second and CITHM who ranked third.

College of Arts and Sciences was given special recognition for having the most number of attendees for MSAD 2019.

BEST IN ATTENDANCE. CAS sent the most number of delegates in this year’s MSAD.

The officers of Voyage, the Official Student Publication of LPU-Laguna, took oath before the awarding ceremony.

Office of the Students Affairs also gave recognition to the student organizations who were reaccredited by their office this year.